First stop on my world tour was the NORML conference in San Francisco.

The first person I encountered stepping off the bus from the airport was a crack dealer with an outstretched palm full of rocks. “Want some crack?” he asked. Welcome to America, I thought.

I was staying with the manufacturer of the Eterra vaporiser we sell at The Hempstore. I arrived at a fortuitous time, because he was developing a new prototype called the Tulip. It is a hand-held device containing a coil heated by electricity. When you inhale air is drawn past the coil which heats it to just the right temperature to vaporise those trichomes that we love so much. I got to be guinea pig and test the vaporiser for all it was worth, which was a much better welcome to America than that skanky crack dealer.

I had a day to spare before the Norml conference so I paid a visit to Oakland, home of the Oakland Cannabis Buyers Cooperative. The OCBC, led by Jeff Jones, has been at the forefront of efforts to implement Proposition 215, the 1996 State ballot that legalised medical marijuana in California but did not specify how the supply should take place. While some counties and the Federal government continue to harass medical users, the Oakland County deputised Jones and the OCBC as city officials, giving them similar standing to police officers. When I visited, Jones was busy preparing for his latest court battle, this time appealing a US Suprem

e Court ruling from last year that third-party clubs such as his could not use “medical necessity” as a defense to a charge under Federal law. That ruling had stopped the OCBC from dispensing marijuana to patients, so instead they act as a first stop for new patients to have their doctor’s recommendation verified and photo-ID card issued. Patients then go two doors down, past the grow shop, and show their card at The Bulldog Cafe or their choice of seven other dispensaries in the SF-Bay area that supply medical marijuana.

From the street the Bulldog, named in honour of the pioneering Amsterdam coffeeshop, looks like any other cafe although you might start to wonder why so many people keep heading out the back. You’ll need an OCBC ID card to get past the doorman to the dispensary, which offers an enticing menu with a half-dozen baggies of top-quality buds and several varieties of hash. This is medical marijuana – guaranteed organic – and a vaporiser is thoughtfully provided for the patients to use.

More than five hundred activists from the far pockets of North America attended the Norml conference, held at the 30-storey Crowne Plaza Hotel in downtown San Francisco. We had all heard of California’s medical marijuana law and San Francisco’s liberal reputation and were keen to test it with some public displays of affection for our favourite plant. San Francisco District Attorney Terrence Hallinan opened the conference and declared it a sanctuary. “You have nothing to fear here,” he said, which made us all very happy indeed. 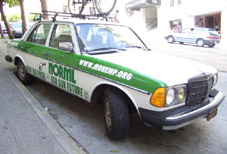 Later that afternoon at the customary time of 4:20 the footpath outside was crowded with cannabis people of all shapes and sizes celebrating and socialising. Two cars running on hempseed oil were parked nearby, and police literally looked the other way whenever they passed. Among the crowd were patients sporting vials of medical marijuana labelled like you would get from the pharmacy. Irvin Rosenfeld and Elvy Musikka get their medical marijuana from the US Federal Government. There are only 8 left people on this special programme, and Irvin is the longest serving patient. He showed me his prescription medi-weed, and rather than good shit, I have to say it is just shit. The US Government holds on to the marijuana for two years before they give it to patients, so it is old and musty. It comes pre-rolled in 300-joint containers, but Irvin rerolls his to remove all the sticks and seeds. He much preferred the smell and taste of the California bud on offer, although he says no pot gets him stoned as the THC is used for therapeutic effects with none left to create a high.

A TV crew had interviewed Irvin earlier that day so at six o’clock we went to Irvin’s room to catch the news. It was a nice moment seeing him smoke 100% legal medical marijuana on the television and there right in front of me, both at the same time.

The next day former NORML director Richard Cowan hosted an international panel and recounted to the conference all the countries around the world that are in the process of ending cannabis prohibition. “Americans need to pay more attention to what is going on around the world. Other countries have moved ahead of the so-called ’leader’ of the free world.”

I then gave a short talk to the conference about what we have been up to in New Zealand with the cannabis inquiry, having our first hemp crop and the world’s only Rastafarian MP. After that it seemed like everyone wanted to share their marijuana with the person who had traveled the furthest. I thought it would be rude to refuse.

My favourite was called Honeybud, and it was apparantly banned from the Cannabis Cup. The buds had been coated in pure THC, giving them the appearance of being dipped in honey. This stuff was so strong that I had not finished one gram by the time I left four days later. Honeybud goes for US$50 per gram and worth every penny.

Debbie Goldsworthy was an inspiration for all as she told us about the Cannabis Action Network and the Cannabis Consumers Union she set up at Berkerly University. The aim was to work within the “green area” to get cannabis users to a place where they are safe and the police are afraid to bust anyone. The Union mandated a sensible use programme, ran a good neighbours programme to keep the locals happy, made sure everyone was enrolled to vote so they would have political power, and collected 6,000 signatures of support to make the police think twice about doing anything. The arrest rate was halved and an open marijuana market allowed to flourish. She brought more good news to the conference: that morning the Cannabis Action Network had unveiled a huge 8m x 8m banner down the side of a building, reading “No war on patients: Californians say YES to medical marij

uana”. It made the news that night too.

Prof. Craig Reinarman gave a presentation about the study he conducted with Peter Cohen comparing drug use rates in Amsterdam, San Francisco and Bremmen (Germany). The research found drug policies have no effect on drug use, other than taking a little longer to score. “The end result of spending US$17 billion on a drug war is to add about 3 hours 15 minutes to the time it takes to get drugs,” he concluded. “In the Netherlands marijuana use stops being demonised and starts to look just like one more cultural practice in a very sane society.”

That night the SF Patients Resource Centre kindly hosted a party for the conference delegates. It is a real hippie place, so we ate space cake, rolled fat joints and sang folk songs. Centre director Wayne Kuffman welcomed us like family and said “If there’s anything I can advise, it’s never give up hope.” His group worked hard to be responsible. They had produced the first patient ID card, got the city council to change the Health and Safety Code, drafted a resolution making SF a sanctuary.

The next day at the conference, I got talking to Ed Rosenthal, author of many of the best grow books and the Ask Ed grow section in Cannabis Culture magazine. Ed has just been busted by the DEA and charged with being part of a grow circle for a California patients group. Even though State law says this is legal, Federal law still classifies cannabis alongside heroin and cocaine. Despite the risk of jail time looming, Ed was upbeat and even joined NORML New Zealand. I took great pleasure in welcoming him aboard and wished him the very best for his fight with Uncle Sam.

I also caught up with David Hadorn, the driving force behind the New Zealand Drug Policy Forum and current resident of Victoria, Canada. I was pleased to hear he will be spending more time in New Zealand and putting his many skills to work in our law reform movement. David introduced me to Philippe Lucas, director of the Vancouver Island Compassion Society, who is being prosecuted for his activities while the Canadian government has simultaneously given the go-ahead to medical marijuana on prescription. I decided to visit them both in Victoria, Canada, after the conference.

The final day at the conference featured crowd-pleasing appearances by US canna-celebrities, and a lifetime achievement award was presented to drug education expert Marsha Rosenbaum of the Drug Policy Alliance (formerly the Lindesmith Centre). It was great to see her many contributions acknowledged. Marsha and DPA director Ethan Nadelmann came to New Zealand last November at the invitation of the Coalition for Cannabis Law Reform and did a great job testifying to the health select committee’s inquiry into cannabis.

Our other overseas experts, Peter Cohen from the University of Amsterdam and Alex Wodak of the Australian Drug Law Reform Foundation were also at the conference and it was nice to catch up with them as well as many other people from North American drug policy reform groups, such as Drugsense, MAP (who provide the database for norml.org.nz’s news page), DRC Net, Common Sense for Drug Policy, Marijuana Policy Project, Cannabis Action Network, Vote Hemp, and many of the Californian medical marijuana organisations. In between meeting people there were was an array of panels and forums discussing every aspect of cannabis and the law.

The conference closed with a wild party featuring a semi-naked 40-piece marching band and about a ton of marijuana.

Back in ‘Oaksterdam’ and around the corner from the Bulldog, Compassionate Caregivers has no sign and the doorman wouldn’t let me in without a doctor’s note. I returned to the Bulldog and met Jack Herer, who was in town for the Norml conference. The man at Compassionate Caregivers was all smiles for Mr Herer and we headed upstairs to investigate. Several display cases were bursting with dozens of varieties of marijuana, hash, kief, tinctures, brownies, muffins, chocolates, teas and cuttings for patients or their caregivers to grow. I shared a pipe with Jack on the rooftop ganga garden, and thought that San Francisco is a mighty fine place to be, especially if you have a note from your doctor.

I headed north to Vancouver, home of the B.C. Bud and the city recently voted by High Times readers as the most marijuana-friendly place on earth. >>